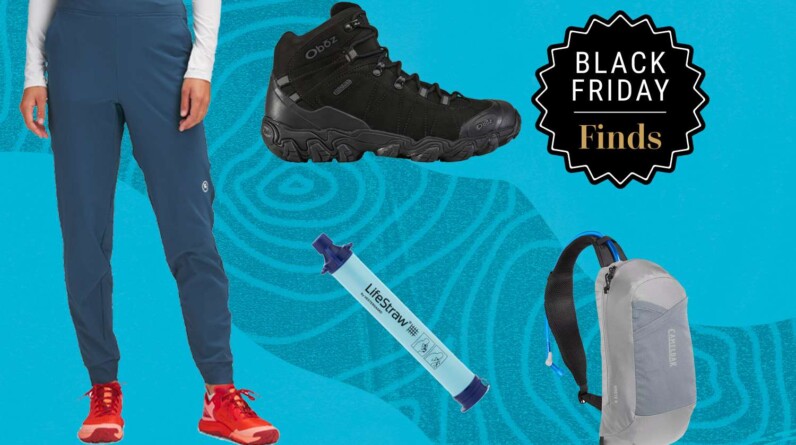 Winter is one of the best times to stock up on hiking gear for upcoming treks in the spring and summer. Luckily, Black Friday is here with a massive selection of deals on hiking gear that outdoor enthusiasts won’t want to miss out on. Retailers like REI, Amazon, Backcountry, and more are offering discounts on clothing, accessories, and shoes for as much as 70 percent off.

Hiking boots can be pricey, but REI has hiking boots on sale for as little as $60. For example, this pair of Merrell women’s hiking boots are slashed by over 23 percent bringing the total down to $100 (originally from $130). Or, if you’re in need of a pair of men’s hiking boots, these Hoka boots usually cost $170 but thanks to Black Friday savings, the price was cut down to $137.

On the hunt for clothing? Virtually swing by Backcountry and Eddie Bauer to scoop up savings on tons of clothing items like this pair of Eddie Bauer Women’s Guide Pro Pants for $64 and the Outdoor Research Women’s Ferrosi Hiking Shorts for $57. And for all of your hiking accessory needs, Amazon has you covered with discounts on the LifeStraw for just $13 (originally $50) and this Energizer LED Headlamp for $12, which is nearly 40 percent off.

We’re seeing some of the lowest prices of the year right now. To help you sift through all the epic deals available, we’ve rounded up the 61 best hiking deals categorized by retailer. Below, you’ll find the top sales on everything from waterproof pants to hydration backpacks to leggings. Happy shopping!

Amazon offers tons of deals on hiking clothes, boots, and accessories this Black Friday. You can score this pair of water-resistant women’s hiking pants for $28 if you’re a Prime member, or these useful and best-selling trekking poles for as little as $20 thanks to a special on-site coupon. Backpackers can also get sweet savings on hiking gear like this highly-rated and incredibly useful LifeStraw to safely drink water from a river. It’s on sale for just $12 and it typically costs $50.

REI is the holy grail for outdoor gear and while the retailer might have their physical stores closed for Black Friday, their online sale is definitely still happening, with loads of great deals. There are plenty of hiking boots marked down — like these Merrell men’s hiking boots that are currently 23 percent off and this pair of Salomon women’s hiking boots that’s been marked down to $110, which is a rare discount. Need something to wear on the mountain? REI has everything you need to trek in all kinds of weather, including this Mountain Hardwear Women’s Railay Pullover  for up to 51 percent off that slashes the original price down to a wallet-friendly $44.

Another outdoor retailer offering stellar savings, Backcountry boasts some of the best hiking deals we’ve seen, especially for clothing. For example, these moisture-wicking women’s fleece pants typically run for $60 but with Black Friday savings, you can pick up a pair for $80. You can also scoop this Stoic men’s jacket for as little as $40 making it the perfect outerwear layer for budget-friendly hikers spending time outdoors this winter.

From deals on hiking accessories to clothing, Dicks Sporting Goods has something for every type of hiker. If you’re planning to hike with small children, consider nabbing this Osprey child carrier on sale for just $285. And for hikers looking to scoop a handy hydration backpack, this CamelBak hydration pack is marked down to $50, too. The added zip pockets that sit on your hips are great for snacks, band-aids, and extra pairs of socks for your little ones.

Eddie Bauer has a massive selection of clothing and hiking shoes on sale for as much as 50 percent off. These men’s convertible hiking pants already have great value as they can be worn as hiking pants, unzipped to be worn as shorts, and they’re on sale for Black Friday for $67. They’re also water-repellent and super lightweight. Looking for a gift for her this holiday season? Scoop a pair of the women’s Mountain Ops hiking boots for $133 today.

We love Lands’ End for their selection of size-inclusive and high-performing outdoor clothing. Whether you’re in search of a fleece layer or waterproof jackets, Lands’ End has Black Friday deals with up to 70 percent off; just add the code TURKEY at checkout. This women’s plus size insulated vest usually costs $51 but with Black Friday savings for 50 percent off, it can be yours for just $26. Or, you can pick up this cozy men’s fleece jacket for as little as $25. It goes with practically everything, and can be a great part of your layering system for any winter weather.

Love a great deal? Sign up for our T+L Recommends newsletter and we’ll send you our favorite travel products each week