Home Trending News My Black family needs me to travel, just as much as I need it 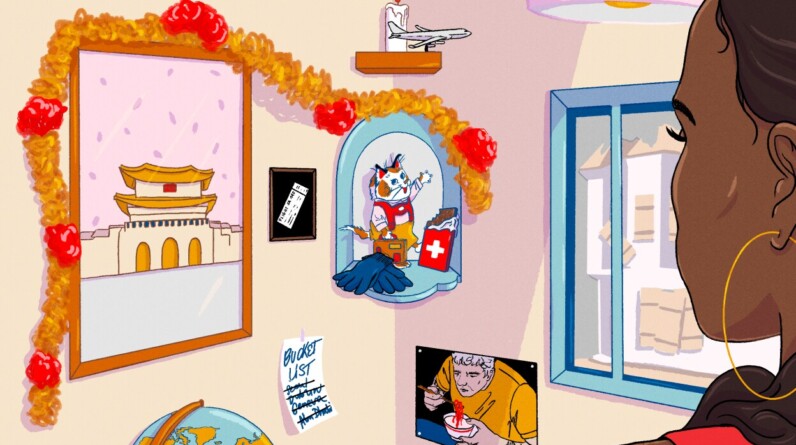 Travel is a privilege. If you lack opportunities to leave the country, and you’re not born into a family of means, it can seem light-years away.

Both applied to me growing up near Camden, N.J., a city that many associate with a history of crime but I know as much for its rich character and devoted citizens. Years before I could afford to go, I dreamed of visiting the places Anthony Bourdain and Samantha Brown went on TV.

In popular travel movies and shows, we don’t see people who look like us falling in love in Paris or backpacking through the Italian Alps. It’s hard to imagine traveling somewhere when you only see a sea of White faces. These places seem inaccessible, especially when Black people are sometimes othered in their own backyards.

Though I have only been consistently traveling abroad for the past decade, I’m tackling a bucket list and hoping to inspire other Black people to step outside of their comfort zones. Some people travel to escape. Others want to collect bragging rights. I travel for my own sense of adventure — and for my Black loved ones.

Diversifying the face of travel, one TikTok at a time

I make my treks with my family at the front of my mind. I put a lot of thought into souvenirs; I don’t do tchotchkes at all.

I bring back local goodies that will make family members feel like they were there: Swiss chocolate from Geneva, wool gloves from Dublin and a black-and-gold silk caftan from the Sheikh Zayed Grand Mosque in Abu Dhabi.

Before I go somewhere new, I’ll send a text to at least five people that says “I’m traveling to — — — what do you want me to bring you?”

Always on the list: my aunts Kim and Denise, my mom, my godmother Myeshia, and Kennedy, my 10-year-old cousin. I’ll also buy a shirt for my 86-year-old grandmother and a cap for my Uncle Garry.

Kennedy is always the most creative. From my recent trip to the French Alps, she asked for books. “What sort?” I ask. “Picture? Chapter? Coloring?” Picture, since she wouldn’t be able to read most of the French text, even though she’s been practicing the language since our trip to Quebec City almost a year ago.

For her 12th birthday, I have promised to take her to Paris, though my goal is to take her sooner. I’ve had her passport in my safe for a year, and her parents said “no rush” when I offered to drop it off. They hope I feel moved to take her somewhere new.

While I’m away, I drop photos in the family group chat. When I FaceTime Kennedy from a scenic destinations, like an overlook in Chamonix in the French Alps, she and her father or grandmother peek over her shoulder, taking in the scenery with me. I’ve made this a habit since I went to Seoul in 2015, connecting to sketchy WiFi so that my mom could see Gyeongbokgung Palace. That was my first time abroad, and I made it an experience for the whole family.

More of my family members are getting passports. My aunt is in her 60s and has been afraid to fly, but she went to Florida anyway. She has even agreed take a cruise with me one day.

I realize that many Black people won’t get to travel out of the country, let alone see Asia and Australia. I’ve visited these places only through discounted fare alerts and hostels. In my family, at least, my grandma reminisces about visiting Israel in the ’80s with my grandfather. I still have the gorgeous skirt my aunt Denise brought me from South Africa in the early 2000s.

As a married person in a two-income household with no kids, I have freedom to travel as much as I please. But the reality is, foreign travel is a luxury that’s most accessible to the childless, rich and retirees.

With the pervasive wealth gap, Black adults will work until they physically can’t, and children are costly. In my experience, many Black people can be overly cautious about leaving their kiddos with just anyone, even for a sleepover.

My White friends, on the other hand, were taking friends on family trips as far back as elementary school. In the summer, my mom would drop me and my brother off at my grandparents’ house in Camden before work. That, plus weekend day trips, were what our break looked like.

The show made my grandparents’ tiny one-bedroom apartment feel so much grander.

We were at Ferry Station Apartments by 7:30 a.m., and I’d try to fall back asleep. But instead I’d turn on cartoons, watching “The Busy World of Richard Scarry” before my grandma started on her stories. The titular animated cat showed me places I’d never heard of, like Austria and Hungary. The show made my grandparents’ tiny one-bedroom apartment feel so much grander.

There were only two things I wished for as a kid: I’d travel the world, and I’d be a journalist. Both came late, but both came true. It wasn’t until I spoke to a class of high school juniors at a Philadelphia charter school earlier this year that I realized the impact my experiences had on people. I was talking about journalism, but somehow we got on the subject of travel.

“Where were you born?” one girl inquired. “Camden,” I responded, and I watched as she furrowed her brow in confusion.

The news typically shows the worst of Camden, just like they do with West Philly, where the students live. I’m sure it was difficult for that girl to see outside of her environment. Hearing me tell my story could help her see what’s possible in her life.

While I was born in Camden, all of my raising and schooling was in the nearby suburbs. I lived in a single-parent home. For my classmates, privilege meant your family had a shore home — truly the Jersey sign of wealth. The rich kids returned to school in the fall with epic tans and stories for weeks.

Even when they were organized on a payment plan, my household couldn’t afford to join the trips that my aunt and cousins put together. But at 16, I got invited on a trip with my friend’s family, and I got to go to Las Vegas. Seeing the Strip version of the Eiffel Tower and pyramids only confirmed that I had more exploring to do.

With what time is available to me, I plan to continue to inspire my loved ones, saving up to show some of them more of the world.

Tonya Russell is a South Jersey-based writer specializing in health, wellness and travel. Follow her on Twitter @thetonyarussell.