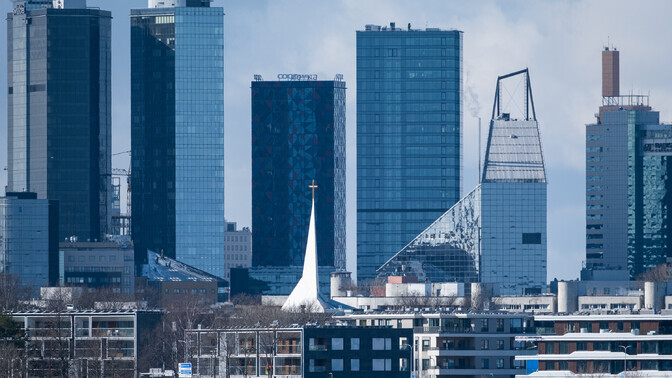 Banks are valuable. For example, there are four banks among Estonia’s ten most valuable businesses, a report by financial consultants Prudentia and NASDAQ Tallinn reveals.

Banks have been enjoying few loan losses since the previous financial crisis, while regulation has also been mounting. But banks operating in Estonia remain profitable and still report solid quarterly financials.

“Banks’ loan portfolios are usually tied to a base rate. As interest rates go up, customers will soon be paying more for their loans,” Priisalm said.

Veikko Maripuu, chairman of the supervisory board of Finora Capital that recently got a banking license in Lithuania and plans to expand to Estonia, also said that higher rates help banks, adding that loan losses have also been few and far between.

“Times are not too bad. But quite a lot depends on how the economy will fare in general,” Maripuu suggested.

Europe’s cooling economic climate is the main question for banks. A recession would see individuals and companies take out fewer loans, while bankruptcies could start adding to loan losses.

Priisalm admitted that risks have grown. “Banks are operating with a lot of leverage, and 5 percent of a bank’s loan portfolio turning bad would have a massive effect on financials. It would wipe out a lot of capital, which is why banks tend to be higher-risk propositions,” the banker offered.

“That we will have a recession is inevitable, or rather a fact. It should come as a surprise to no one and is hardly news for financial investors or banks’ shareholders. But I believe that unlike in the previous crisis, banks are well prepared today,” said Romet Enok, manager for active funds at LHV Varahaldus.

Partner at consultants Superia Corporate Finance Henrik Igasta agreed, saying that banks are much better capitalized and massive bailouts are not to be expected.

To buy Coop or not?

Coop Pank shareholders decided in early November to issue new shares to grow the business. The price on offer is €2 per share. Coop is currently trading around the €2.2 level on the Tallinn exchange.

Investors can start subscribing to shares on November 29.

The main question to be considered is Coop’s future, Priisalm said.

“Things have been going well so far, and the bank has exceeded expectations from the time of its IPO. But investors must consider economic developments, some of which are already evident,” Priisalm said.

“It is much more difficult to raise deposits today, which is why they need to use foreign platforms to involve capital. This costs more. The board has suggested risk expenses might start going up from next year, so these are the main points to consider,” the expert offered.

Veikko Maripuu sports a more optimistic view of Estonian banks’ growth potential. “I think the banking sector is not a bad place for money that one can afford to invest as part of a broader portfolio. Perhaps Coop too in this context. It has demonstrated growth and I’m sure it can generate some synergy on the Estonian market,” Maripuu suggested.

“Running things from afar has done them [Scandinavian banks} a disservice. The locals are becoming more skillful and mindful, with decisions made on site. It will have an effect in the end,” Maripuu said.

It is very difficult to bring a new bank to the Estonian market. While it used to be easy 30 years ago, this is no longer the case.

“I would say one out of ten attempts could succeed today,” the banker said.