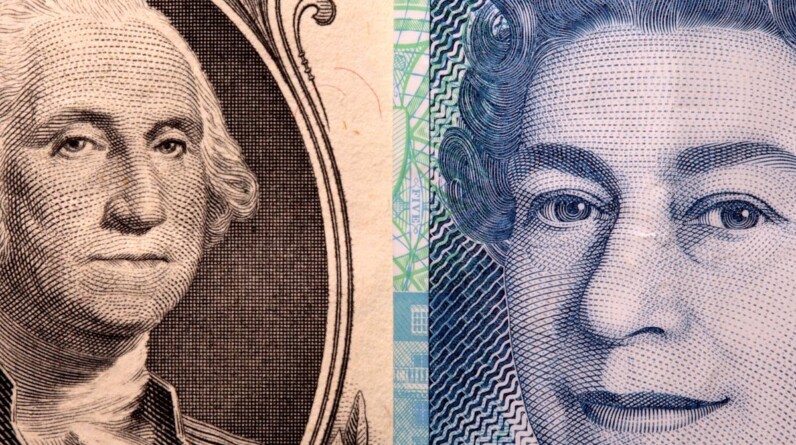 The pound has hit its highest level against the dollar since mid-August, but it is still down around 10% year-to-date. Photo: Dado Ruvic/Reuters

The pound (GBPUSD=X) continued to push against the US dollar on Thursday, reaching its highest level since mid-August and the start of Liz Truss’ premiership.

Sterling was up 0.2% on the day, at the time of writing, after reaching as high as $1.2113 during the session. The climb knocked the FTSE 100 (^FTSE), which was underperforming against its continental peers.

This means the currency has managed to recover by almost 20 cents since hitting its record low in September after the chaos caused by Kwasi Kwarteng’s mini-budget. The pound hit a low of $1.035 in its aftermath.

However, it is still down around 10% against the dollar year-to-date.

“A stronger pound hits the relative value of the FTSE 100’s largely overseas earnings but the reason for the dollar’s slide is a positive one for sentiment,” AJ Bell investment director Russ Mould said.

It came after the US Federal Reserve showed support for tapering interest-rate increases in its latest meeting minutes published on Wednesday night.

Minutes indicated several officials backed the need to moderate the pace of rate increases as they look to tame soaring inflation and boost confidence in the US economy.

“A slower pace in these circumstances would better allow the committee to assess progress toward its goals of maximum employment and price stability,” the minutes said.

The move now points to expectations that the Bank of England (BoE) will follow suit and raise rates by 50 basis points next month, from 3% to 3.5%, ending a run of 75 basis point hikes.

“We have got that feeling of ‘pause’ to see what’s going to happen next… in terms of central banks,” Daniela Hathorn, senior market analyst at Capital.com, said.

“This tone reinforces the narrative that 50bps is coming in December with subsequent hikes likely to be between 25bps and 50bps.

“That’s not to say that members didn’t hedge those bets with an expectation that rates might peak at a higher level than envisaged, to offset any misconceptions that the Fed might be going soft, but for now markets appear to be going with the smaller hike narrative, rather than the Powell hawkish theme.”