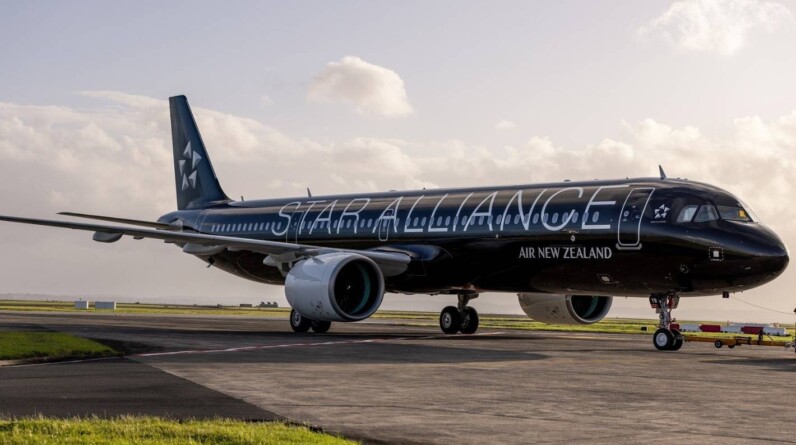 It has a unique livery you won’t find anywhere else in the world, and it has just arrived in New Zealand.

Air New Zealand has welcomed a brand new A321neo to the fleet which will soon be a regular feature around the country.

The special jet-black Star Alliance livery was a request by the airline to show the importance of the colour to the country.

It’s the second A321neo to join the fleet in the last couple of weeks, with both adding 200,000 more seats per year to the domestic network. Three more of the model are due to arrive next year, with a further two in 2026.

The planes will fly the main trunk routes such as Auckland to Wellington, Christchurch, Queenstown and Dunedin.

The new aircraft will have five days of getting ready before embarking on its first flight on December 3 from Auckland to Queenstown.

The A321neo seats 217 passengers, 46 more than the current Air New Zealand domestic jets that fly around the country.

It was first introduced to Air New Zealand’s fleet in 2018 and is used for international flying to places like Australia and the islands – although it occasionally pops up on the domestic network. These planes are equipped with wi-fi and seatback screens for entertainment.

However, the new A321s will be exclusively used for domestic and won’t have extra features like wi-fi or seatback screens.

The new plane arrives as the airports get ready for what is expected to be a busy summer of travel.

December 23 is shaping up to be Air New Zealand’s busiest day for domestic travel, with more than 32,000 customers booked to travel at this stage – 1000 more than the same time last year.

December 15 and 16 were also expected to be some of the biggest days for travelling, as many Kiwis looked set to start their Christmas holidays a week early.