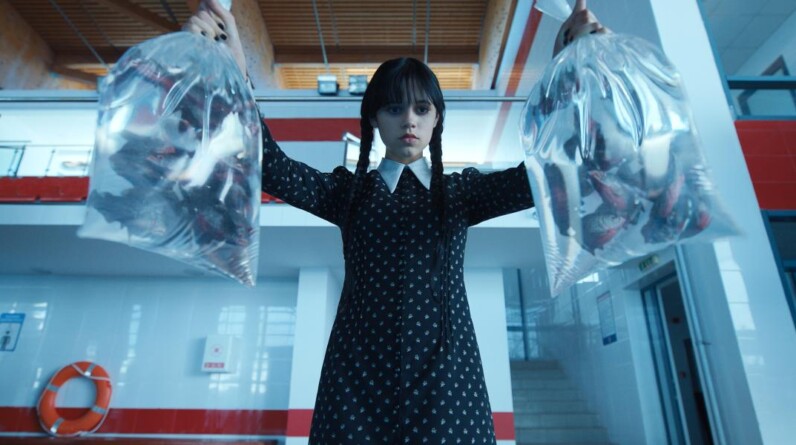 The minute you see the words “The Addams Family,” no doubt you snap your fingers twice. (Or, if you’re a ’90s kid, you might start singing the “Whoomp! There It Is” version of the theme song that debuted with 1993’s “Addams Family Values”). The Addams clan has seen several incarnations since debuting as a series of The New Yorker cartoons penned by Charles Addams in 1938. The cartoons and the various films and television shows that rose in their wake perfectly blend the humorous and the macabre while focusing on the tight-knit family of Gomez, Morticia, their children Pugsley and Wednesday, and Uncle Fester.

The latest iteration is Tim Burton’s series “Wednesday,” set to debut on Netflix on November 23. The series centers on a teenage Wednesday (Jenna Ortega) trying to solve many mysteries, one being how to cement her identity outside the shadow of her ever-glamorous mother, Morticia (Catherine Zeta-Jones). Wednesday is also tasked with harnessing her budding psychic ability to solve a serial killer case at Nevermore Academy and cracking a murder mystery that involved her parents 25 years ago.

With “Wednesday” premiering shortly, it’s an opportunity to look at (and rank) the various depictions of the Addams family over the years.

Note: This doesn’t include one-off television specials like 1977’s “Halloween with the New Addams Family” or their 1970s appearances with Scooby Doo. It also excludes the 1973 short film “The Addams Family Funhouse.”

What Happens: This sequel to the 2019 animated reboot directed by “Sausage Party” helmers Conrad Vernon and Greg Tiernan sees the Addamses go on a family road trip where Gomez (voiced by Oscar Isaac) and Morticia (Charlize Theron) fear Wednesday (Chloë Grace Moretz) might not be their daughter.

How Are the Addamses: Where the 2019 feature had some sly, subversive humor for adults, this one lacked anything particularly fun or memorable. The movie barely clocked in at feature length, even padded by credits and a performance from Cousin It — voiced by Snoop Dogg. Really, this movie showed that the Addams family might need to be a bit more macabre to leave an impact.

Theme Song: The famous theme song created for the 1960s television series comes at the movie’s end, sung by Christina Aguilera of all people. The animated credits are probably the most charming element of the film.

What Happens: Gomez (Tim Curry) plans a family reunion, but a mix-up sees the family end up at the swanky home of Dr. Philip Adams (Ed Begley, Jr.), who plans to murder his father.

How Are the Addamses: This one ranks just above 10 because of how weird it is. And that’s saying something for a movie about the Addams family. Starring Tim Curry as Gomez and Daryl Hannah as Morticia, director Dave Payne initially conceived the direct-to-DVD feature as dark and edgy. But studio Saban wanted something aimed at families and significantly altered the script. The finished product is fairly terrible, but where else will you see Madison the Mermaid and Pennywise play the first family of darkness?

Theme Song: Again, I gotta give this movie some credit for being bizarre. In a 2016 interview for Yahoo!, Payne said he’d planned a suitably appropriate theme for the film. Instead, Saban brought in the group Strate Vocalz to perform the ’60s theme song with a mix of doo-wop and New Jack swing. The results are highly entertaining, to say the least.

What Happens: The Addamses move to New Jersey and attract the eye of a TV reality host who wants to see them conform.

How Are the Addamses: This animated reboot marked the return of Charles Addams’ characters after 20 years, and the results are charming. Sure, social media decried Oscar Isaac voicing a Gomez that looked more like The New Yorker Gomez than Raul Julia’s, but he brought a serious burst of tenderness to the character. Some of the jokes are outright hilarious and, according to a 2019 Forbes interview with the directors, toned down for an audience of families.

Theme Song: If we were ranking based on the theme song alone, this would probably go lower. The ending does include a rendition of the original ’60s TV theme, but it’s more a lead-in to the true end credits song “My Family,” performed by Migos, Karol G, Snoop Dogg, and Rock Mafia, which is….fine.

What Happens: This Hanna-Barbera animated series sees the Addams clan climb into their Creepy Camper to travel across the U.S., leaving chaos in their wake and stumbling upon various mysteries.

How Are the Addamses: The Addamses popped into an episode of “Scooby Doo” in 1972 in that grand tradition of the era of turning every show into a cartoon. In this case, it was the launchpad for “The Addams Family,” marking the return of the Addamses to television after a decade’s absence. It was certainly funny hearing the Addams with the patented cartoon laugh track and looking like the original Charles Addams conceptions. If you enjoy the format of “Scooby Doo,” you’ll probably gravitate to this. Unfortunately, the series was canceled after 16 episodes.

Theme Song: Weirdly enough, most of the clips of this cartoon have the 1992 animated theme song playing over it, so it’s unclear what theme song opened the 1973 cartoon. I’m gonna assume it sounded like a spookier version of the “Scooby Doo” theme.

What Happens: The Addamses move to Happydale Heights while dealing with their meddling neighbors, the Normanmeyers.

How Are the Addamses?: Released in the wake of the 1991 film’s success, this take on the Addamses saw John Astin — Gomez from the original TV series — reprise his role as the voice of this animated Gomez. The animation feels very 1992, but it’s perfectly aligned with other cartoons of the era, like “Teenage Mutant Ninja Turtles.” This version ran for two seasons before being canceled in 1993.

Theme Song: This one has a very fun, Thurl Ravenscroft-esque rendition of the ’60s TV theme. The animation also works to great effect, with the house almost coming alive during the opening credits.

What Happens: The Addams family navigates familial issues, only this time, they have weird supernatural abilities.

How Are the Addams: There’s an “Addams Family” for literally every generation, and “The New Addams Family” was aimed at anyone who watched “Are You Afraid of the Dark,” “Eerie Indiana,” or any of the late ’90s shows that aired on the Fox network. This series firmly wanted to be a retread of the ’60s show, right down to recreating several of the original episodes, albeit with modernized references. Despite the low budget, the cast here is very good, with Glenn Taranto and Ellie Harvie an entertaining Gomez and Morticia. John Astin even popped onto this series for several episodes playing Grandpapa Adams. Though the show filmed 65 episodes, it only ran for a season.

Theme Song: Despite remaking several episodes from the ’60s series, this iteration doesn’t use the original theme. Instead, it’s a very ’90s rhumba-esque theme that I could see Gomez and Morticia dancing to, but it’s not an earworm like the more famous theme.

What Happens: Wednesday Addams (Jenna Ortega) attends Nevermore Academy, where she learns about a murder her parents were implicated in and a case that connects back to the Addamses of the 1600s.

How Are the Addamses: Gomez and Morticia (Luis Guzman and Catherine Zeta-Jones, respectively) are present and accounted for, but this series is all about Wednesday. To show what a small world the “Addams Family” is, Tim Burton, who helmed half of the series’ episodes, was initially offered the chance to direct the 1991 feature but passed to work on “Batman Returns.” Star Jenna Ortega perfectly utilizes the deadpan humor to play the character as an old-school noir detective, not just like the Addams daughter we’ve come to know. The series pays loving homage to both the original series and the popular ’90s films, though Wednesday pulling off the iconic dance that Lisa Loring, who played the character in the ’60s, does is probably my favorite Easter egg.

Theme Song: Danny Elfman pens an original theme for this Netflix series that is suitably moody. The series utilizes a lot of cello, as it’s Wednesday’s favorite instrument, so the theme sets the tone for the series and the character.

What Happens: The Addams family reunites with Gomez’s (Raul Julia) brother Fester (Christopher Lloyd), who was presumed lost at sea. Unfortunately, Fester’s return is part of a con that seeks to kick the family out of their house.

How Are the Addamses: After numerous attempts to craft a new television series, Orion Pictures decided to take a chance on a new feature film. The movie was plagued with production difficulties, but it was a commercial hit upon release in 1991, bringing the Addamses to a new generation. Julia and Anjelica Huston, as Gomez and Morticia, remain couple goals, and because the movie was aimed at families and a slightly older audience, the humor was remarkably darker.

Theme Song: The movies are perfect, but the theme songs are….iffy. MC Hammer performed “Addams Groove,” and while the music video isn’t as hilarious as another one on this list, it must be seen to be believed.

What Happens: The series that started it all, the original 1964 take on “The Addams Family” saw them dealing with all manner of sitcom hijinks, finding love, and dealing with society in a deadpan way.

How Are the Addamses: The original “Addams Family” series is a 1960s sitcom, so it’s short on plot and long on funny things. As Gomez and Morticia, John Astin and Carolyn Jones might not have been as overt in their sexual chemistry compared to the films, but they are a beautiful couple. Much like their more successful competitor, “The Munsters,” the series was a move away from the more country-inspired fish-out-of-water stories that were popular at the time (like “The Beverly Hillbillies”), with the Addams’ darkness at odds with conventional society.

How are the Addams: The 1993 sequel to 1991’s “Addams Family” might be more beloved than its predecessor, and it’s easy to see why. This movie is family entertainment that also welcomes outcast tweens looking for a movie that understands them. Christina Ricci’s performance as Wednesday is utter perfection. It’s one of the rare sequels to define the entire franchise.

Theme Song: “Whoomp! Addams Family!” How do you know this was made in 1993? Because Tag Team does the theme song, reconfiguring their popular “Whoomp! (There It Is)” for this movie. The music video brings lots of enjoyment.