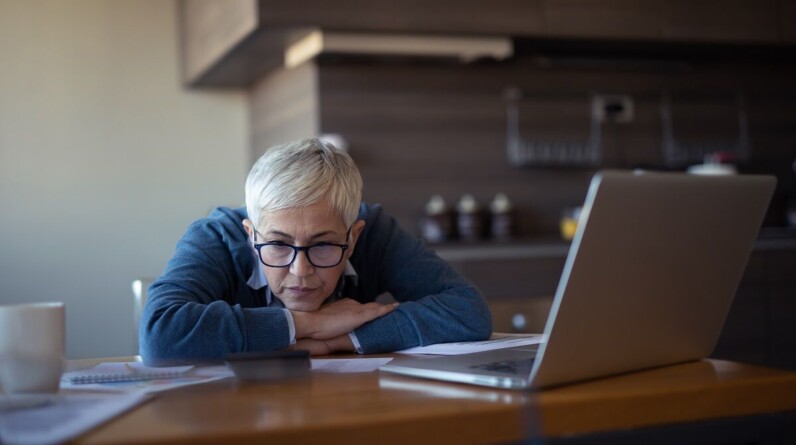 With inflation at a 40-year-high of 11.1 percent and energy bills rocketing, millions of employees aged 50-plus are being forced to re-think their retirement plans. Almost half (46 percent) have delayed their retirement and are being forced to stay in work longer, a report has revealed. Ten percent of those already retired have had no choice but to return to work to make ends meet.

The worrying research by the WorkingWise jobsite – sponsored by lender Santander – has revealed the impact of the cost-of-living crisis on staff who would normally be coming to the end of their working lives.

In addition to the workers who have come out of retirement, a further 26 percent of those who have retired may need to return.

The report, which has launched during National Older Workers Week, has found that if they were afforded a choice, two-thirds of middle-aged employees would like to reduce their hours.

But 41 percent cannot afford to do so, found the report, launched to mark National Older Workers Week. Older workers contribute £20bn a year to the UK economy.

Mandy Garner, of workingwise.co.uk, said: “For many older workers, they are stuck between a rock and a hard place, unable to retire but unable to pay the bills in their current roles.”

There are now just over 9m people aged 50-plus on payrolls – an increase of more than 210,000 since last year.

However, the Institute for Employment Studies has calculated that, if pre-Covid-19 trends had continued, there would be almost 500,000 more older workers in the labour market today.

A decade ago financial hardship in the pre-retirement years was no more common than for adults in general, according to the Fabians Society.

A worrying research has revealed the impact of the cost-of-living crisis/Picture posed by model (Image: Getty)

Now there is more poverty between the ages of 60 and 65 than at any other stage in adult life.

And over the last 12 years the minimum age for drawing the state pension has increased from 60 to 66.

According to latest data from the Office for National Statistics, the average pay of a worker aged between 50 and 59 is £31,358.

If it were a viable option, almost two-thirds (63 percent) of older workers admitted they would like to take early retirement, found the survey of 2,000 UK adults by WorkingWise.

For 48 percent, this is due to job dissatisfaction while 34 percent cited health issues.

A further 13 percent would welcome early retirement due to caring responsibilities. Over half (51 percent) admitted they would like to change careers.

The pandemic has played a clear role in the health decline of many older workers.

Over a third (34 percent) say their physical health has deteriorated over the course of the pandemic.

One in five (21 percent) say this is due to Covid while 24 percent blame NHS backlogs. Almost half (44 percent) said their mental health has deteriorated.

Almost half (45 percent) of those who had encountered ageism in the recruitment process said they altered or left out their age on their CV to get around ageism.

Of those who have experienced ageism, 54 percent encountered it in the application process, 30 percent in job adverts and one third at the interview stage.

Catherine Foot, director of longevity thinktank Phoenix Insights, said: “With a third of the workforce already over 50 and this proportion set to continue to grow, it’s crucial that businesses are tackling age discrimination and providing the necessary support to enable employees to stay in work as long as they need to.”

Families are also seeing their “spending power” shrink, research by the Centre for Economics and Business Research for Asda, has found.

Budgets were cut by £35.57 per week in October compared with the same month a year earlier.

After paying tax and essential bills in October, the average household had £203 per week left – the lowest amount since August 2018.

The figures were released as a separate report from Nationwide Building Society and said that spending on essentials rose by 10 percent year-on-year in October, while spending on non-essentials increased by six percent.

The report analysed millions of debit card, credit card and direct debit transactions, made by Nationwide members in October.

Nationwide said the increase in essential spending reflected the increased costs of bills and services such as energy, fuel, food and drink, mortgages, rent and debt repayments.

Mark Nalder, payments strategy director at Nationwide Building Society, said: “As expected, rising essential costs are putting increasing pressure on households, forcing them to divert even more income towards them.”

Helen Smith is 63 and still works three days a week as a receptionist for a firm of solicitors. Ideally, the mum of three adult sons would have retired at 60, but she had to carry on working.

Unless the cost-of-living crisis eases, she will work until she is 66. But if her bills continue to soar, retirement could be as late as 70.

Helen, of Exeter, used to spend £60 a week on groceries, but now that they are costing up to £20 more, she has cut back, especially on meat.

The divorcee has not yet renewed her broadband contract and won’t bother unless she can find a cheaper deal.

Her car is crucial as she suffers from osteoarthritis and finds walking difficult. But as fuel costs have gone up, non-essential outings have been ditched and she just uses the car for her commute.

“I really enjoy my job and it’s a very supportive workplace, but I really don’t want to keep working until I’m nearly 70,” said Helen, who also gets £30 a week from a son who lives at home.

“I’m finding now that all of my food costs are going up but my income isn’t.