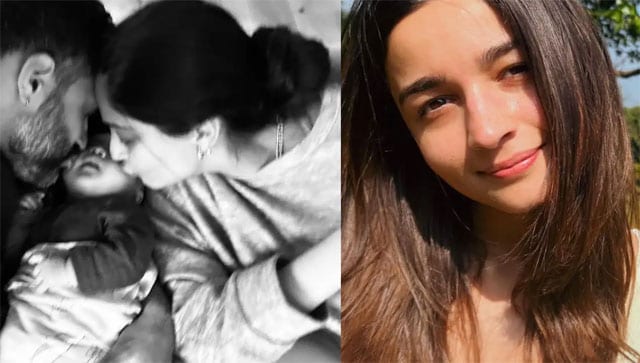 Fans who have been desperately waiting to get a glimpse of Vayu Kapoor Ahuja are in for a treat this Monday. B-Town’s new parents Sonam Kapoor and Anand Ahuja seem to be marking the third month after their baby boy’s birthday via a road trip. No, we aren’t saying that, Sonam’s Instagram account holds the testament to the same. Sharing a glimpse of the adorable family together, the actress dropped a beautiful reel featuring her husband Anand and son Vayu. Sonam, who has been keeping herself busy with mommy duties, has also shared a glance of Anil Kapoor performing his grandpa duties perfectly. The video features the Kapoor-Ahuja family enjoying a road trip, which also marks their first vacation with Vayu. Not only this, but Sonam’s latest post has also garnered the attention of the newest mom in tinsel town, Alia Bhatt.

Sonam shared the memorable video, with Taylor Swift’s Sweet Nothing being played in the background, and mentioned the title of the much-loved track in the caption. Sonam ended the caption with nazar and red heart emoticons and with hashtags “everyday phenomenal, and Vayu’s parents.”

The video opens by showing Sonam decked in all black. The actress, who is holding the camera, firstly captures herself and then pans it towards her husband, who is driving the car. Sonam also captures Vayu taking his nap in his baby cot in the back seat. After that, the actress shares a glimpse of a picturesque view of the road and the wilderness. The next shot shows Anand, holding his son in his arms, as he is walking up the hill. The video also shows Anil Kapoor and Anand taking a walk with Vayu. Towards the end of the video, Sonam can be seen holding Vayu in her arms.

While choosing the cover of the video, Sonam added a monochrome picture of herself and Anand kissing Vayu, who is sleeping like a log. Continuing the trajectory of hiding their son’s face, Sonam and Anand vaguely shared several glimpses of their son. Now, the latest post has garnered immense attention. Several fans took to the comments section to express their emotions, while many celebrities showered their love upon the newest member of the Kapoor family. The newest mom in town, Alia Bhatt, commented, “So beautiful,” and ended her comment with a red heart emoticon. Actresses Bhumi Pednekar, Athiya Shetty, and Sayani Gupta dropped a handful of red heart emoticons. Meanwhile, Vayu’s father Anand took to the comments section and wrote, “Around the world with my whole world,” and ended with a hashtag, “everyday phenomenal”.