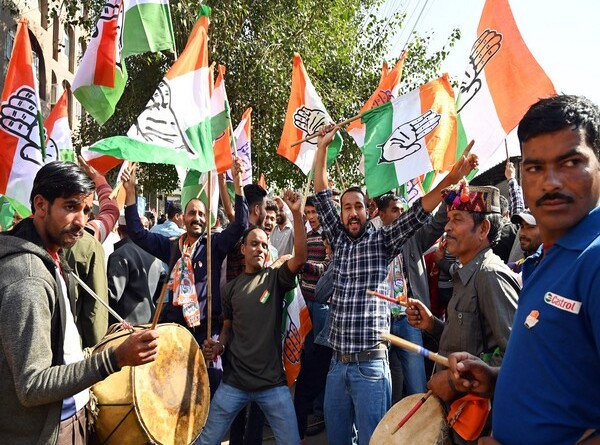 By Siddharth Sharma
New Delhi [India], November 23 (ANI): With a fortnight left for the announcement of the results of Himachal Pradesh elections held last month, Congress heavyweights in the state are going for the fences for securing the chief ministerial post.
Congress sources said internal surveys indicate that the party is likely to get a majority in Himachal polls leading to increasing the number of contenders for the chief minister’s post.
A senior leader told ANI that they are confident that Congress is winning 42 to 46 seats in Himachal and some independent MLAs who are expected to go through in the battle are also in touch.
The situation is that the senior leaders of Himachal have already started making their presence in Delhi. Former state president and head of the campaign committee Sukhwinder Singh Sukhu is visiting senior leaders in Delhi, while Pratibha Singh, the party MP from Mandi and wife of former CM Virbhadra Singh and her son Vikramaditya are also proposing to visit the national capital.
After becoming the Himachal Pradesh CM in 1983, Virbhadra Singh had been dominating the state Congress. Whenever the party formed the government, he became the CM of Himachal.
This is the first election since 1983 that the party fought without Virbhadra Singh due to his demise.
However, it was Virbhadra Singh’s dominance that his wife Pratibha Singh jumped into the election becoming president before the election. Party fielded his MLA son Vikramaditya for the second time as well. But his negligible administrative experience comes in the way of the CM’s chair to the Royal family, said sources.
Another big leader from Thakur community, Sukhvinder Singh Sukhu, the former Himachal Congress president is also in the race for the chief ministerial post. Sukhvinder who also had been the state NSUI and Youth Congress chief never had good terms with Virbhadra Singh.
Further, six-time MLA from Dalhousie Asha Kumari comes from the Royal family of the Thakur caste. Asha Kumari is the sister of TS Singh Deo, who is the minister in the Chhattisgarh government. Notably, it is said that the party high command had promised to make TS Singh Deo for two and a half years, which was not fulfilled and Bhupesh Baghel continued as Chhattisgarh CM.
Sources in the party said if Asha Kumari, who was a cabinet minister earlier, reaches the assembly for the seventh term then the family might claim the chief ministerial post for her. long political fight between Asha Kumari and Virbhadra Singh as well. It was said that Asha Kumari was also not on good terms with Virbhadra Singh.
Now, keeping the family of Late Virbhadra Singh away from the Chief Minister’s chair and handing over the baton to his opponent Thakur leader will prove to be a problem for the high command and the rest of the veterans might oppose the Thakur leader of a low stature Royal family, said sources.
In such a situation, there are two influential Brahmin leaders Mukesh Agnihotri and Sudhir Sharma close to Virbhadra Singh’s family could be alternative choices for the party.
However, in Himachal politics, it is tough for the Congress high command to give preference to Brahmins in comparison to Thakurs. After all, for years, whether it is Congress or BJP, they have been betting on Thakurs with more population for the CM’s chair, be it Virbhadra Singh, Prem Kumar Dhumal or Jairam Thakur.
On Tuesday, senior Congress leader Rajiv Shukla held a meeting with all the candidates of Congress in the Himachal Assembly polls and discussed the preparations for the counting day.
Pertinent to mention, Congress expressed similar hopes after the Uttarakhand polls a few months back and preparations were made to make Harish Rawat the CM but the results were otherwise and BJP formed the government. This time, Congress has asked its leaders not to hover around Delhi till the results of the Himachal Pradesh polls are announced.
Restlessness can be witnessed among the leaders of party’s Himachal unit and individual efforts are being made to shine their lucks. For this, the process of getting winnable MLAs in their fold has also started under the ground.
Polling for 68 legislative assembly seats in Himachal Pradesh was held on November 12, and the state recorded a 75.6 per cent voter turnout and thus breaking the 2017 record.
The results are scheduled to be declared on December 8. (ANI)