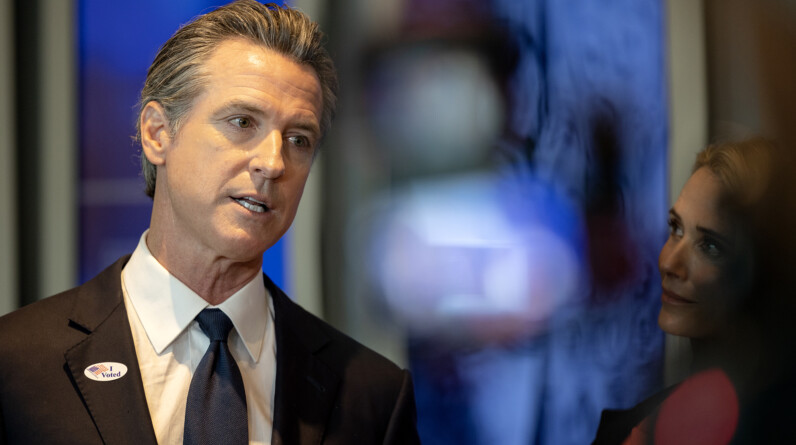 Gov. Gavin Newsom left California on Sunday to travel with his family for the Thanksgiving holiday, but due to security concerns, the trip location won’t be revealed until after he returns next weekend, according to his office.

The California Highway Patrol, which handles the governor’s security, made the safety determination, according to Newsom’s office. The CHP did not respond to a request for comment Sunday.

Newsom’s out-of-state travels have come under heightened scrutiny following his summer trip to visit his in-laws in Montana, one of 23 states to which California has banned state-funded travel due to policies it deems discriminatory to LGBTQ+ people. Although Newsom paid for the trip with personal funds, he seems to have been accompanied by a taxpayer-funded security detail — which his office and the CHP have suggested is a permitted exemption under the travel ban.

The nature of the security concerns is unclear, though Newsom told me in an interview last year, “You guys, lovingly, don’t have any sense of the threats.” Nevertheless, when Newsom traveled for Thanksgiving last year, his office shared in advance that he would be in Mexico.

However, both Newsom’s profile and that of his wife, Jennifer Siebel Newsom, have grown significantly in the past year. While Newsom has picked fights with GOP Florida Gov. Ron DeSantis and burnished his national image in what some have speculated is groundwork for a potential presidential campaign, Siebel Newsom last week testified in Harvey Weinstein’s high-profile Los Angeles sexual assault trial, alleging that the disgraced movie producer raped her in 2005. Weinstein has denied the allegation.

Newsom departed for his Thanksgiving trip two days after meeting with city and county officials in Sacramento to discuss developing more ambitious plans to reduce street homelessness. The upshot: Newsom will release most of the $1 billion in one-time homelessness funding that he blocked just two weeks ago, as long as applicants pledge to craft more aggressive blueprints for the next round of funding, CalMatters’ Manuela Tobias reports.

Nevertheless, local officials warned their ability to mitigate homelessness will be constrained without a permanent stream of state money.

On a related note: What was California’s wildest housing story in 2022? Make your voice heard by filling out this brief survey for Gimme Shelter: The California Housing Crisis Podcast, hosted by Manuela and the Los Angeles Times’ Liam Dillon.

Other Stories You Should Know

Ballots at the Sacramento County voter registration and elections office in Sacramento on Nov. 8, 2022. Photo by Rahul Lal, CalMatters

With about 1 million ballots from California’s Nov. 8 election left to be tallied as of late Friday, here’s a look at the latest election updates:

We know the U.S. House of Representatives is in Republican hands, but just how big will the GOP margin be? The answer could largely be determined by California: As of Sunday, Republicans had 218 seats and Democrats 212, with 3 of the 5 races not called by the Associated Press in California. The closest contest is in the new, open 13th District, anchored in Modesto, where Republican farmer John Duarte is in a tight battle with longtime moderate Democratic Assemblymember Adam Gray. In another closely watched race in Bakersfield, Republican incumbent David Valadao is leading his Democratic challenger, Assemblymember Rudy Salas. And GOP Assemblymember Kevin Kiley is leading Democrat Kermit Jones in the race to represent a 450-mile district whose voters are concentrated in the Sacramento suburbs.

A double defeat for the Hertzbergs: Termed-out state Sen. Bob Hertzberg had hoped to win a seat on the Los Angeles County Board of Supervisors — but he was beat out by Lindsey Horvath, a progressive West Hollywood city councilmember. And Daniel Hertzberg, who sought to succeed his father in the Senate, lost to Caroline Menjivar, a military veteran who will be the first openly LGTBQ+ legislator to represent the San Fernando Valley. The two races mark a victory for political newcomers from the left over a nascent political dynasty.

What’s next for Los Angeles Mayor Eric Garcetti? With U.S. Rep. Karen Bass set to take over as mayor of Los Angeles on Dec. 12 — and declare a homelessness state of emergency that day — Garcetti is ramping up his efforts to get the U.S. Senate to confirm his appointment as ambassador to India, the Los Angeles Times reports. Nearly 500 days after President Joe Biden announced the appointment, a vote has yet to be scheduled. “I’m optimistic because a lot of people said, ‘Wait till after the election,’” Garcetti said. “We can focus on it now and I’m optimistic we’ll get it scheduled and get it done. I’m ready to serve.” Garcetti’s confirmation seems to have been stalled in part by reports that he ignored allegations of a former top aide sexually harassing coworkers, according to the Los Angeles Times.

California’s state prison system transfers inmates with severe mental illness far more frequently than other prisoners, according to newly obtained data analyzed by CalMatters’ Byrhonda Lyons, Jocelyn Wiener and Erica Yee. They found that between 2016 and 2021, the California Department of Corrections and Rehabilitation moved prisoners in “enhanced outpatient” mental health treatment three more times on average than other inmates — and one person in and out of the mental health program was transferred an astonishing 75 times during that period. The figures illuminate California’s practice of shuffling around mentally ill inmates, which was unearthed by a June CalMatters investigation focused on Adam Collier, a severely mentally ill prisoner who was moved 39 times between 2016 and 2020 before committing suicide in Kern Valley State Prison.

In related news: Detainees in several of California’s privately operated, for-profit immigration detention centers are striking for better pay, calling their current wages of $1 per day in a voluntary work program a “slavery rate,” KQED reports. State lawmakers earlier this year rejected a bill to ban involuntary servitude in California, which advocates say would have paved the way for inmate workers in state prisons to earn minimum wage.

3
On job front, both good and bad news

A restaurant advertising jobs looks to attract workers in Oceanside on May 10, 2021. Photo by Mike Blake, Reuters

California’s economy continues to send mixed signals: The state’s unemployment rate rose to 4% in October, up from a revised record-low rate of 3.8% the month before, the Employment Development Department announced Friday. Yet California has now regained 101% of the more than 2.7 million jobs lost during the first two months of the COVID-19 pandemic and, as Newsom’s office noted, accounted for more than 20% of the nation’s new jobs in October.

“In the face of the other negative employment news of the past few days — the continued tech layoffs, the projected state budget deficit of $25 billion — this is generally positive news,” Michael Bernick, a former EDD director and attorney at Duane Morris, told me in an email. Still, he added, “the tech layoffs will continue” amid concerns of an impending recession. California-based tech companies have laid off at least 82,600 workers so far this year, according to the California Center for Jobs & the Economy.

Other economic news you should know:

CalMatters columnist Dan Walters: Not only does California have a severe shortage of affordable rental housing, it also has a crisis in homeownership, with the nation’s second most expensive home market relative to family income.

Other things worth your time

Some stories may require a subscription to read

How a political rookie pulled off an election upset to lead San Jose. // Mercury News