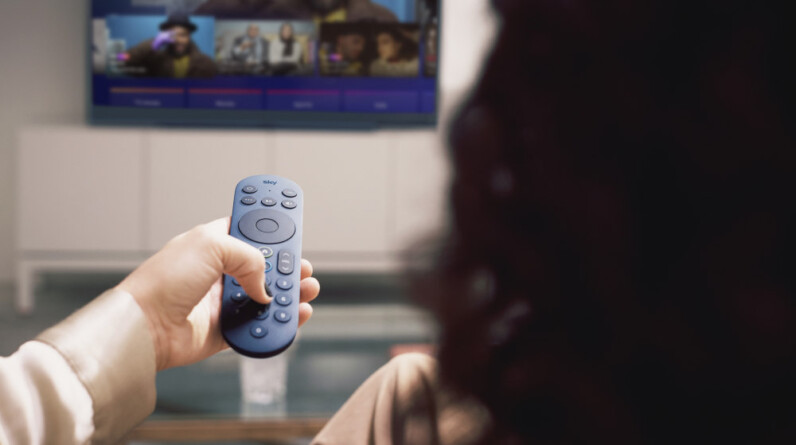 And while it’s possible to pay £5/month for the Ad-Skipping add-on (which is free for your first 18 months), it won’t actually remove the adverts – and on some apps you can only use that function to Fast Forward adverts, and not actually, well, skip them.

Ad-supported streaming services like Pluto TV, Amazon’s Freevee and more are becoming common these days, with some of the premium paid services like Netflix and Disney+ adding cheaper ad-supported tiers.

But with Sky, you’re already paying premium prices – therefore, getting adverts on top, without even having a paid option that removes them completely – is causing some Sky Glass and Sky Stream customers to complain on social media and Sky’s own forums.

Sky Glass (see my review), which was released last year, is a 4K TV set that features a QLED HDR display and a built-in Dolby Atmos soundbar with six speakers.

Sky Stream (see our review), which launched a few weeks ago, is a standalone streaming set-top box that works with any broadband provider.

Unlike other Sky services in the UK, Sky Glass and Sky Stream don’t use a satellite dish – instead, they rely on broadband, and stream all the content to the TV, much like other streaming devices like the Amazon Fire TV and Roku – or streaming services like Sky’s own NOW (see our Sky Glass VS Now comparison).

Therefore, both Sky Glass and Sky Stream don’t have any local storage for recordings – instead, on-demand content is streamed to you either from 3rd party services like BBC iPlayer and All4, or from “Cloud Recordings” – so any fast forwarding and ad-skipping is dependant on each app’s functionality.

Until recently (and since the launch of Sky Glass last year), adverts on Sky’s native on-demand content (that is – shows and films you get directly from Sky, and not 3rd party apps like All4) were only visible BEFORE the start of shows and films – and even then, they were quite minimal.

A recent update, however, has added more ad breaks, and some shows/films now stop several times an hour to show you adverts.

It’s worth noting that Sky Q customers have been seeing adverts for years, even though they’re also paying premium prices – but that’s not very common with streaming services these days – unless they’re free, or you subscribe to special cheaper tiers, like the new Netflix Basic-with-Adverts tier.

Sky Glass and Sky Stream offer an optional Ad Skipping add-on which is free for the first 18 months (therefore, most customers still have it for free, but will start paying for it at some point).

In Sky’s defence, they always said this add-on would let you “skip” adverts, and not make them disappear completely.

The Ad Skipping add-on works when you use Live Pause, Restart, Playlist or Sky On Demand, and also on three 3rd party apps – ITV Hub, STV Player and All4.

However, Skipping isn’t exactly the correct term here either – as it mostly means Fast Forwarding.

On Sky’s content, you can only use the remote’s buttons to Fast Forward the adverts.

But there’s a trick to actually Skip forward – by using your voice: Tell Sky Glass or Sky Stream’s remote “Hello Sky, skip X minutes” – and you can sort of skip over the adverts (but you have to be careful not to skip ahead too much).

On the 3rd party apps, you can’t skip with your voice – and Fast Forwarding is the only option left.

ITV Hub (soon to be ITVX) and All4 have their own No-Adverts paid add-ons, which make the adverts go away completely – but that’s not what you get with Sky’s Ad Skipping add-on.

The on-screen buttons start jumping around at times, it’s hard to control the fast-forwarding speed, and occasionally everything goes crazy and the programme freezes or goes back to the beginning.

Sky says that they are “working with the app partners to make sure this experience is as consistent as possible so rewinding and fast forwarding is seamless and easy, no matter which app you’re in.”

On the topic of adding more adverts, Sky confirmed to us that since the launch of Sky Glass they’ve been gradually rolling out the capability to show adverts on Sky’s on-demand content (as it is on Sky Q), therefore most customers on Sky Stream and Sky Glass should now be seeing them.

Sky has another long-running streaming service, NOW, which also has pre-roll and mid-roll adverts (they were added last year).

But on NOW, you can pay for NOW Boost – which, for £5/month, will remove the adverts completely.

As in, you won’t see them at all, and won’t have to fast-forward anything (Boost also adds 1080p video quality and a few other perks).

And that’s when – for the most part – NOW is cheaper than Sky Stream or Sky Glass.

On the other hand, NOW’s Boost has nothing to do with ITV Hub, All4 and STV Player – so it won’t let you fast-forward adverts on those services.