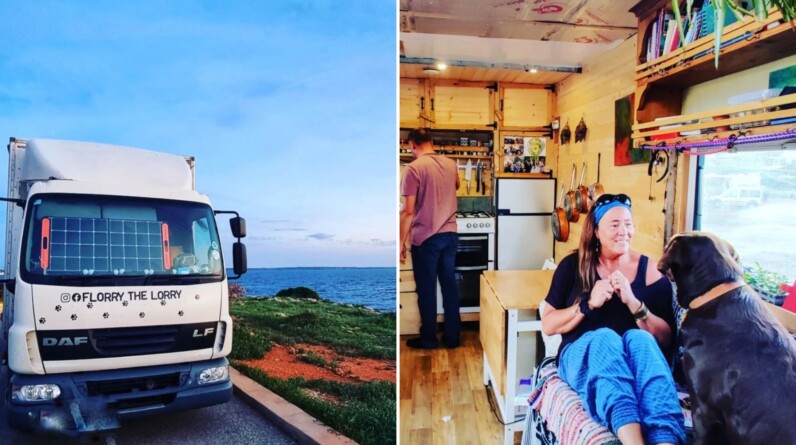 A COUPLE found an innovative way to cut out their soaring bills – by emptying their home and moving into seven-tonne lorry.

Catherine, 52, and Chris, 50, quit their nine-to-fives and decided to travel the world – bringing their new mobile home along for the ride.

The married couple left the rat race and now live in their seven-tonne lorryCredit: Instagram/@florrythelorry

Catherine and Chris renovated the lorry into their new home in 2019Credit: Instagram/@florrythelorry

The couple, who have been together for 13 years, found tenants for their suburban home and sold most of their belongings as they switched to their new lifestyle.

They were able to “escape bills” and head to the sunshine in their lorry – named Florry.

It comes equipped with an open-plan living, eating and sleeping space, with a separate shower and toilet room.

But despite saying they are now happier than ever, Catherine admitted: “I did feel scared when we said we’d do it, but I knew we couldn’t carry on as things were.”

The couple had a family of five children from previous relationships, but said making the move was “all about timing”.

The mum told Wales Online: “My girls were leaving home and Chris’s children, who have a full-time home with their mum, were saying they would prefer to spend holidays rather than weekends with us, so we decided the time was right.

“We both like scuba diving and had been out in Menorca, where one of our instructor friends invited us to her home, which turned out to be a lorry!

“That sowed the seed and when we came back to England, we just thought, we could do the same.”

Catherine, a part-time secondary school teacher, said Chris’ punishing career in IT was another motivation to make the change.

“We knew we couldn’t and didn’t want to continue as we were, as Chris was depressed and stressed by the long hours he was working, we were both exhausted and, because the family’s needs were changing, we both said, ‘Let’s do it then,’” she said.

“We’d always had holidays in motorhomes, but knew they were too small to live in and not always that well-built, so we started looking for a lorry and soon found Florry, on eBay, in November 2017.

“She was only the third lorry we looked at, so it all happened quite fast.”

But after making a successful first “test run” trip to France in March 2019, their bold plans were quickly called into question when Florry broke down.

The week-long wait to get their home fixed in a garage left them both homeless, forcing them to crash with family.

“We’d not planned for that happening and were glad she broke down during the test run and not when we finally left the UK a good two months later,” said Catherine.

By May, their vision was back on track – and they set out on the open road alongside their chocolate Labrador Rolo.

The couple then spent seven months travelling through Europe, going to France, Spain, Menorca, Germany, Holland, Switzerland, Austria and Belgium, sleeping by the roadside or paying to stay in overnight car parks.

‘WEIGHT OFF YOUR SHOULDERS’

Finally away from his stressful career, Chris said life in the lorry has been the ideal getaway from the stress of modern life.

He said: “When we left London, we gave so much away after emptying a four-bedroom house, that we suddenly realised we didn’t need all those material things.

“It’s a weight off your shoulders when you get rid of it all and there’s not a single thing I now miss.

“I have photos up on one side of the lorry and, for me now, my memories are my photos. I don’t need all those possessions.

When I go back to London and see people living in the rat race, I realise I just don’t want that anymore – I’m so much happier

“We eat much more healthily, too. You can’t just order a take-away and we don’t really eat out because we are on a budget.

“I sleep a lot better and love the fact we’ve simplified everything. We’re less stressed, so of course that makes everything much easier.”

The duo now hope to keep their nomad-lifestyle for as long as they can.

Catherine said: “This is really our last window of time to do this in, before we have responsibilities to family members again.

“There’s no fixed plan. It would be nice if we could enjoy five or six years of this lifestyle, but we’re very fluid.

“The only thing I know is that I never want to give rid of Florry, so she will always be part of our future plans. She’s part of the family now.”